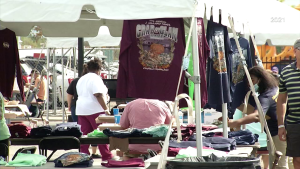 CRISFIELD, Md. – A delicious seafood-inspired event is making its return this Wednesday, September 28th in Crisfield. However, it’s not just about the food, it’s a ‘political who’s who’ for Maryland’s lawmakers

The 45th J. Millard Tawes Crab and Clam bake returns, bringing state and local political leaders to the crab capital of the world. It’s a day filled with crabs, clams, oysters, corn just to name a few items, musical entertainment, and much more.

Being it is an election year, the event is a perfect opportunity for the community to network, and learn more about the political leaders, and their commitment to not just the Eastern shore, but all of Maryland. “It’s not as intimidating to be able to talk to somebody and the elected officials like it because they can kind of be natural,” says Daniel ‘Danny’ Thompson, Co-Chair of the J. Millard Tawes Crab and Clam bake. He adds, “They’re not in front of the camera all day, they take a selfie type of thing and they just don’t get that when they’re in more of a structured typesetting.”

Thompson also tells 47 ABC, there will also be about 35 hospitality tents, and businesses to give back to the community, as well as their employees. Many members of the general assembly will be there, as well as both impending governor nominees, Wes Moore, and Dan Cox.

You can purchase tickets on Eventbrite or click here for more information.