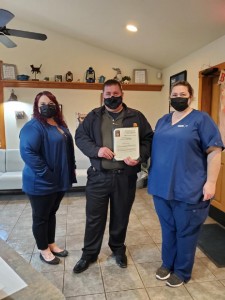 DORCHESTER COUNTY, Md. – Staff at Choptank Animal Hospital were recognized by the State Fire Marshal for their work in a fatal fire investigation. The fire killed two people on New Year’s Day.

Dr. Katelin McConkey and Brandy Warnick were presented a Unit Citation for their role in the investigation. Unit Citations are given in situations where other law enforcement agencies, or their members, have provided exemplary and meritous assistance to the Office of the State Fire Marshal.

After investigators found the remains of the owners’ two dogs within the home, they weren’t sure how the fire started, and if it the owners died due to homicide. A family member of one of the victims told investigators that their dogs were highly protective of their owners, and would have died doing so.

Dr. McConkey offered to preform necropsies on the two dogs for free. She performed the necropsies in front of her staff, which fire investigators say was a learning experience. It also revealed that the dogs had died from smoke inhalation. “In this case, Dr. McConkey stepped up and volunteered her services for free to not only assist our investigators but most importantly provide answers and ultimately bring closure to the family,” said State Fire Marshal Geraci in a release.

In a release, Deputy Chief State Fire Marshal Matthew Stevens said “Fire investigation is a slow, methodical and tedious process. Any fire that results in a fatality is even more arduous. This finding assisted investigators in focusing their resources on the origin and cause of the fire.”