‘An embarrassment to our state’: Chair of Dem. party speaks after Harris accused of trying to bring gun to House 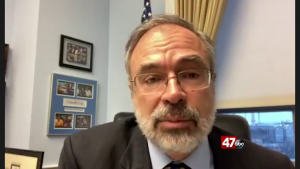 SALISBURY, Md. – The Maryland Democratic Party is speaking out after Republican Representative Andy Harris was accused of attempting to bring a gun onto the House floor on Thursday.

Yvette Lewis, the chair of the Democratic Party in the state, said in a statement: “Rep. Harris, you are an embarrassment to our state and to the good people of the first district. Resign immediately – or be voted out.”

The party had previously called for Harris’s resignation earlier this month after they say Harris encouraged rioters at the Capitol.

47 ABC reached out to Harris’s office on Friday for comment regarding his alleged attempt to bring a gun onto the floor of the House. A representative for his office said he had no comment, but on Thursday, 47 ABC received a statement from Chief of Staff Bryan Shuy that said:

“Because his and his family’s lives have been threatened by someone who has been released awaiting trial, for security reasons, the Congressman never confirms whether he nor anyone else he’s with are carrying a firearm for self-defense. As a matter of public record, he has a Maryland Handgun Permit. And the Congressman always complies with the House metal detectors and wanding. The Congressman has never carried a firearm on the House floor.”