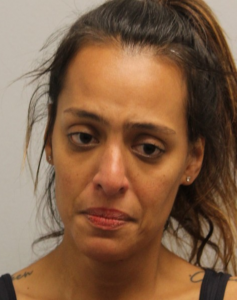 Police responded to the Big Chill Surf Cantina around 1 a.m.

We are told during the confrontation the man agreed to sit inside of Matthews’ truck and discuss terms of an agreement.

Police said while the man was inside, he threatened to call the police, so Matthews then took off driving down Coastal Highway and refused to let the victim out.

Police said during the encounter Matthews pulled out a handgun and held it in her right hand, while she drove.

Officers said Matthews then got lost in a development and witnesses who were at the Big Chill located the pick-up truck and blocked the car in until police arrived.

The victim did not sustain any injuries from the incident.

Police said they found a loaded Glock-22 .40 caliber handgun inside of the truck.

Matthews was arraigned before the Justice of the Peace Court and committed to the Delores J. Baylor Correctional Institution on $7,100 secured bond.