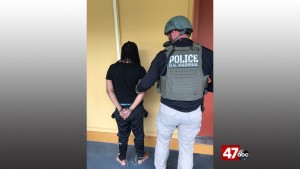 NORFOLK, Va.  – A Bloods gang member on the run from attempted murder charges in Accomack County since March 25 was captured on Thursday, April 23, in Pocomoke City.

The Accomack County Sheriff’s Office says Robert “RJ” James Northan Jr. shot a man, multiple times, on March 25 at home on Tyler Lane. Northan is charged with attempted murder, use of a firearm during the commission of a felony and possession of a firearm by a convicted felon.

“I would like to thank the U.S. Marshals and all the agencies involved with this team effort in bringing this fugitive to justice,” says Accomack Sheriff W. Todd Wessells.

“I am routinely humbled by the tenacity and the “never give up” attitude displayed by Deputy Marshals and our state and local law enforcement partners. Despite the significantly increased risk to law enforcement during the crisis caused by the ongoing viral pandemic, the public should take comfort in knowing that the Marshals Service and their partners are still on the street every day helping to ensure that the public is protected from dangerous groups and individuals. Cases like this, under these circumstances, should give the citizens here in Virginia piece of mind in knowing that the Marshals Service works daily to serve the public with Justice, Integrity and Service,” says U.S. Marshal Nick E. Proffitt.