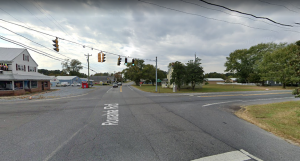 FRANKFORD, Del. – A Frankford man is dead after a police pursuit turned into a fatal crash.

Delaware State Police say around 8:43 p.m. on November 11th, a trooper patrolling the Clarksville area saw an Acura TL commit several traffic violations as it traveled westbound on Vines Creek Road, west of Powell Farm Road. The trooper tried to stop the vehicle, but the driver went into the front yard of a home, make a U-turn, and fled eastbound on Vines Creek Road, police say.

The trooper gave chase as it turned westbound onto Roxana Road. Police say the driver ignored the trooper’s emergency lights and siren, and continued speeding away while committing numerous other traffic violations. When the Acura came upon the intersection of Roxana Road and Pyle Center Road, the driver ran a red light, police say.

The driver of the Acura, identified as a 28-year-old Frankford man, was not wearing a seatbelt according to police. He was pronounced dead at the scene. Identification is pending notification to next of kin. Police say it is unknown at this time whether the driver was driving under the influence of alcohol. The 37-year-old Waynesboro, Pennsylvania driver of the tractor trailer was wearing a seatbelt and was not hurt, police say.

No other vehicles were involved in the crash. The intersection was closed for about five hours as the scene was investigated and cleared. The crash remains under investigation. Anyone with information is asked to contact Sergeant J. Burns at (302) 703-3269.

$135,000 raised in TurkeyTrot for YMCA of the Chesapeake Locations