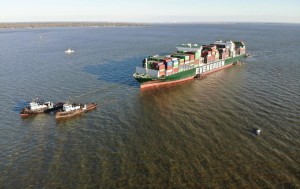 MARYLAND – A container ship grounded in the Chesapeake Bay has been refloated after 35 days. The 1,095-foot long Ever Forward was stuck near Craighill Channel for more than a month.

The U.S. Coast Guard (USCG) says the effort required extensive coordination and a comprehensive salvage plan. That includes dredging, and push and pull tugboat operations. Two unsuccessful refloat attempts were made on March 29th and March 30th. Salvage experts determined they were not able to move the ship as it was loaded with 4,964 containers.

The area around the ship was dredged to a depth of 43 feet. The USCG says 206,280 cubic yards of material were dug out, and taken to Poplar Island. The material is being used to offset erosion at the Paul S. Sarbanes Ecosystem Restoration Project. Meanwhile, operations to remove 500 containers from the ship with crane barges ran from April 9th to April 16th.

The removed containers were placed onto receiving barges during daylight hours. They were then taken to their original onboarding facility, Seagrit Marine Terminal in Baltimore, and offloaded. Two pulling barges and six tugboats then successfully freed the ship around 7 a.m. “The vastness and complexity of this response were historic, as an incident like the Ever Forward grounding, in type and duration, is a rare occurrence,” said Capt. David O’Connell, commander of Coast Guard Sector Maryland-National Capital Region, in a release.

The USCG says extensive steps were taken to protect the environment throughout the operation. Fuel tanks on the Ever Forward were continually monitored. At the same time, equipment was pre-staged for rapid deployment in the event of a fuel spill. “We appreciate the steady partnership with the Coast Guard, Evergreen Marine Corporation and all the other agencies that worked to prevent pollution and protect the Chesapeake Bay,” said Maryland Environment Secretary Ben Grumbles in a release.

The Ever Forward is a Hong-Kong flagged container ship. The USCG says the ship will now be towed to Annapolis Anchorage Grounds for inspection. It will be reloaded with the containers that were removed, and continue its trip to Norfolk, Va.