DHSS announces changes to how COVID-19 tests will be administered 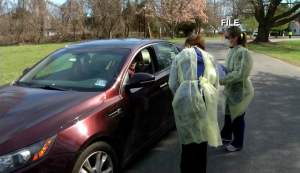 DELAWARE – The Delaware Department of Health and Social Services says they’ll be changing the way they test for COVID-19. DHSS says their testing partner Curative, Inc. will shift from using a self-administered saliva-based test to a self-administered shallow nasal test. The new method is expected to have the same turnaround time for results, which is about 24 to 48 hours after Curative’s lab receives samples.

The new Abbott shallow nasal PCR test has been phased in at Curative testing sites since June. DHSS says even though the tests are changing, Delawareans still won’t have to pay to get tested. They also say testing cites will continue collecting health insurance information from those getting tested.

DHSS says those arriving for testing will be monitored and instructed by trained personnel on how to use the test. They say it involves putting a swab into one nostril about half or three-quarters of a inch in, and swirling the swab for about 15 to 30 seconds. People getting tested will then do the same thing in the other nostril.