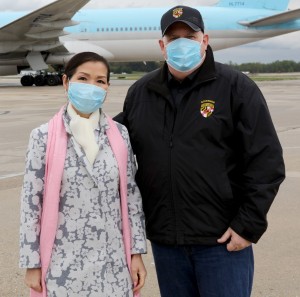 MARYLAND – Maryland’s First Lady Yumi Hogan is set to take on a new role. The First Lady is now serving on the Advisory Council of The Asian American Foundation (TAAF). It’s a new non-profit organization – created in response to the recent surge of hate crimes against Asian Americans. The foundation called First Lady Hogan “one of the most distinguished Asian American leaders in the nation”.

The advisory council’s mission is to ensure equality and equity, and protect Asian Americans from discrimination and violence. “I am ready to fight for creating a safer tomorrow without discrimination and hate, giving a better life to the next generations to come, and teaching our society what being American means,” said First Lady Hogan in a press release.

President of TAAF Sonal Shah says the advisory council is honored to have First Lady Hogan join their team. “Her leadership in Maryland has been important for our communities and her advice and experience will be critical for The Asian American Foundation,” said Shah in that same release.

One notable member First Lady Hogan will be serving alongside is former Secretary of State Condoleezza Rice.

Transforming the culture of schools for young black men

The Farmer's Wife bought by Baywater Farms, new produce and bakery to come to Hebron