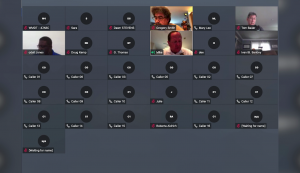 Before that, Mayor Michael Houlihan called for a moment of silence in honor of Cpl. Heacook. “We lost our innocence in Delmar. We can’t take that back. We have a great town, a great community, and people. I know everybody is hurt and grieving with this,” said Mayor Houlihan.

When the time came for public comments, the feeling of the meeting shifted. Residents called in, asking why Cpl. Heacook answered that fatal call alone, and what can be done to raise more money for the police department.

Mayor Houlihan explained that for now, his top priority is continuing to support Cpl. Heacook’s family. The mayor says there will be an opportunity to sit down and discuss what happened that night, and how the town can move forward, down the road.

The mayor added the town has started the process of setting up that public forum with a local mediator. “We recognize that the family and community has lots of questions and ‘What if’s?’ But out of the deepest respect to the family, we will wait until Cpl. Heacook has been laid to rest before having an open forum for dialogue with the residents,” said Mayor Houlihan.

Kathy Heacook, Cpl. Heacook’s sister says that – and more – needs to be done sooner than later. “These people have been there for too long. They’ve made no changes. They’ve had more than ample opportunity. We need change. We need new, aggressive town council, town manager, mayors – people that are going to make a change,” said Heacook.

Heacook says she, and the rest of the community, are still waiting for answers on why Cpl. Heacook was alone when he responded to that call. “Here we have them working short hand, going into criminals’ homes – known criminals’ homes – alone, and this is what happens. I’m not going to let that happen to another officer. I will not let another officer go and risk his life like that again. By my brother’s name, I will not let that happen again,” said Heacook.

Meanwhile, Delmar Police Chief Ivan Barkley says the home where Cpl. Heacook was attacked has had issues in the past. He says a drug overdose death happened there not long before Corporal Heacook was killed. “We know we have a problem, and we’ve been working on it. But we’ve got some serious work to do in that home,” said Chief Barkley.

Mayor Houlihan, Chief Barkley, and other council members also expressed their grief. They say it’s been a hard week for Delmar; perhaps even the toughest loss the town has had to deal with in recent memory. Mayor Houlihan says he is a member of a church that Cpl. Heacook would often visit. “He would come in the back with his uniform on, taking a break from his shift. Everybody felt so comfortable with him in the back. I’m a eucharistic minister at my church. I gave Keith Holy Communion several times. I remember that, and I remember that now. I carry that,” said Mayor Houlihan.

Fundraising efforts for Cpl. Heacook’s family are ongoing. If you’d like to donate, you can find more information here.