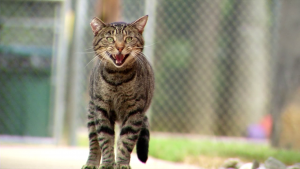 OCEAN VIEW, Del. – A new ordinance in Ocean View says residents in the town cannot legally feed or really care for feral animals in the area. The town’s mayor says it comes after months of complaints of damage done by those feral animals, but now animal activists say this isn’t the right way to handle it.

“We’re all working on it, but one’s the negative way, one’s the humane way,” Nancy Ward, with the Cats Around Town Society, said. She says the ordinance could do harm to the cats.

“They would have to seek other food sources, which becomes the public trash can, it would be anything wild, maybe birds that they could catch on their own,” she said.

But Mayor John Reddington says the ordinance came after months of discussion.

“We had been receiving complaints from residents that, since the end of last year, that feral cats have been destroying people’s property,” the mayor said.

But beyond the harm done to cats, Janice Tyson, a cat foster with Coastal Cats, points to Delaware House Bill 235, which broadly protects free roaming cats in the state, saying the new ordinance contradicts that bill. The bill, however, does not specifically mention feeding cats. And Mayor Reddington says people can still feed the cats, but they have to take responsibility for them.

“We would prefer them to try to domesticate the cats,” he said.

But Tyson and Ward say there’s better ways to handle the feral cat colonies in the town.

“Trap, neuter, vaccinate, and release is the only effective method of reaching that goal,” Ward said.

And that working hand in hand with the councilmen would solve the problem, rather than working against each other.

“We’re all working on it, but one’s the negative way, one’s the humane way, the law that the council should be covering,” she said.

Mayor Reddington says as of now, the ordinance is final, meaning they don’t have plans to revisit it. But, he says if they do receive a substantial amount of feedback from community members, it’s something they’ll discuss again. Meanwhile, Nancy and Janice are planning a peaceful walk for Saturday starting at 9 a.m. outside of the Town Hall to show support for the town’s feral animals.

And that working hand in hand with the councilmen would solve the problem, rather than working against each other.