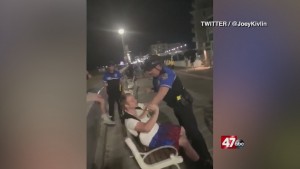 OCEAN CITY, Md. – The 20-year old seen in a viral video of an arrest with use of force in Ocean City is seeking criminal charges against the officer involved.

On Friday, Taylor Cimorosi formally filed an “application for statement of charges” against Lt. Frank Wrench. The charges he is seeking include first and second degree assault, reckless endangerment as well as perjury.

Attorney Richard Brueckner says the criminal complaint will be forwarded to the Worcester County State’s Attorney Office to decide if they will prosecute Lt. Frank Wrench.

Worcester County State’s Attorney Kristin Heiser says no charges have been filed and says it would be inappropriate to comment on this situation at this time.

Brueckner tells 47 ABC he hopes the case will be independently evaluated by a State’s Attorneys Office that is not so closely related to the Ocean City Police Department.

Ocean City Police did not provide an immediate comment on these charges.

Cimorosi has also hired a federal civil lawyer to sue Lt. Frank Wrench, the Town of Ocean City and Ocean City Police Department for “damages and excessive use of force.”

On Friday, the Ocean City Police Department told 47 ABC their use of force review final determination was complete.

“Our officers are permitted to use force, per their training, to overcome exhibited resistance; however, all uses of force go through a detailed review process. In this instance, the arrest went through a multi-level examination by the Assistant Patrol Commander, the Division Commander and then by the Office of Professional Standards. After an extensive review, the Ocean City Police Department has found that the use of force in the May 31st arrest was within policy.”

Click here for our previous coverage on this story.