Space X and NASA flight scrubbed, Wallops gets ready to help at next opportunity 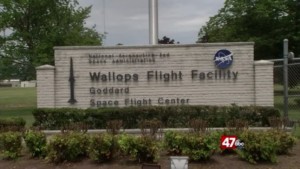 WALLOPS ISLAND, Va. – Wednesday was supposed to be the day that Space X and NASA sent two astronauts to the International Space Station. It would’ve been the first commercial owned space craft to take flight, and the first time Americans visited the space station since 2011. “Since 2011 all of the astronauts that have gone to the space station have been using Russian vehicles. So we had been sending Americans up there, but what’s different about this time is these are the first US astronauts flying on an American rocket from US soil since 2011,” said Wallops Flight Facility news chief Keith Koehler.

Unfortunately, Wendesday’s weather wasn’t in the favor of the space flight. When the flight does happen, a local Wallops Flight Facility will have a hand in making it all possible. Wallops Flight Facility in Virginia will help NASA and Space X to monitor flight progress. “Wallops has been doing this quite a few years. We did it with the space shuttle program and the construction of the space station. So, we’re just in a perfect location for us to be able to send that information to either Space X or NASA – whoever is monitoring this mission,” saiod Koehler.

Koehler says the facility is in a perfect location to help make the flight successful. “We have equipment at Wallop’s so that the space craft and the rocket are sending down information by radio waves on their health. You know, how are things working? We can then receive that at Wallops, and we send that information to California, which is Space X headquarters. They can look at that, and they can monitor how the rocket and the spacecraft are flying,” said Koehler.

Koehler says that it’s important for NASA to keep sending astronauts to the space station, so that America can stay involved in space exploration. He also tells 47ABC that as NASA continues to work with companies like Space X, commercial space flight becomes more of a reality for the future. “With Space X – and probably later this year Boeing will fly their rocket with their capsule – we’ll be entering a new era. So it’s great to be able to partner with these commercial companies in flying astronauts to the space station,” said Koehler.