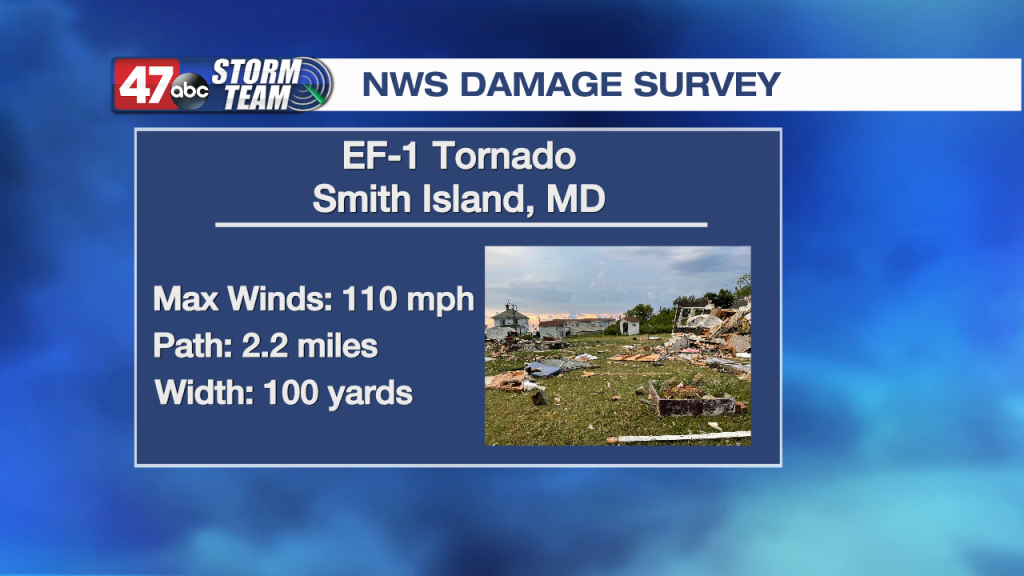 Last Thursday evening, a waterspout came ashore as a tornado on Smith Island, MD just before 7:30pm. The National Weather Service office in Wakefield, VA completed a survey of the damage path, assigning a high-end EF-1 wind intensity rating (on a scale of 0-5) to the tornado. At its peak intensity near Rhodes Point, it was estimated the tornado reached a maximum wind speed of approximately 110 mph. This is considered exceptionally strong for a tornado that originated as a waterspout. (More on the official NWS survey here: https://www.wmdt.com/2022/08/breaking-national-weather-service-confirms-ef-1-tornado-on-smith-island/ )

Although it’s not uncommon for waterspouts to come ashore briefly as weak tornadoes before dissipating, this waterspout intensified as it moved onto the island as a tornado and continued for over 2 miles before exiting the island near Ewell. 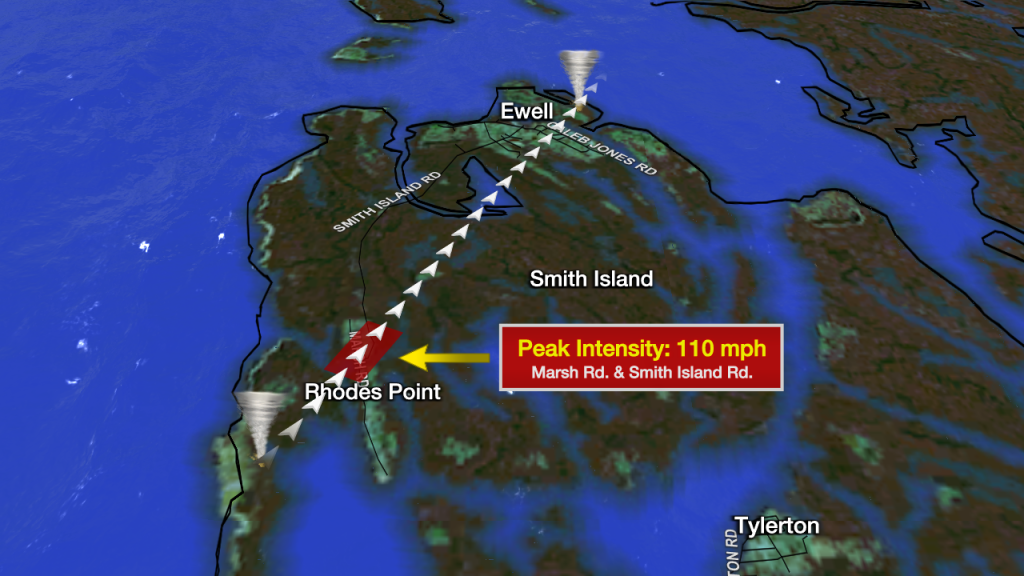 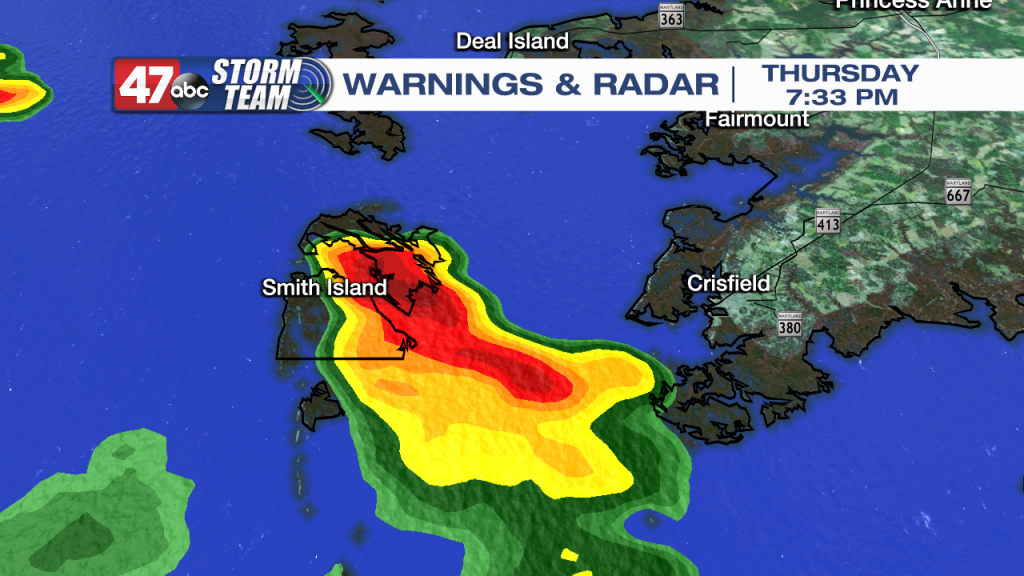 Even more unusual, the atmospheric setup was not conducive to the development of tornadoes that produce 100+ mph winds. Conditions were present for isolated severe thunderstorms that evening, but mainly capable of isolated damaging wind gusts. 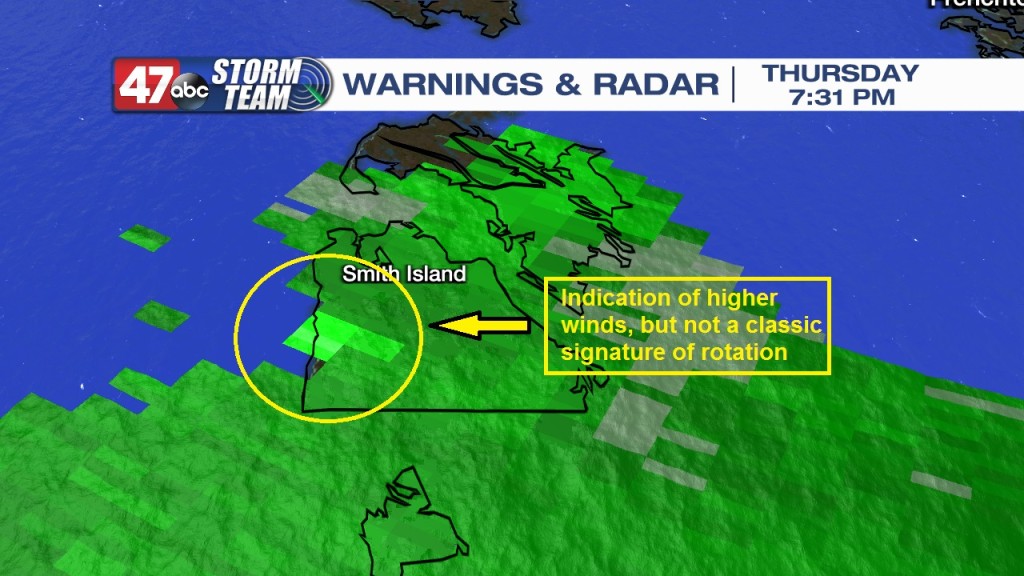 Also at issue was detection of the tornado. The closest radar site to Smith Island is approximately 68 miles away near Milford, DE. In areas this far from a radar site, a real-time near surface scan is not possible. With the curvature of the Earth at play, the radar beam is more than 5000 ft. off of the ground at its lowest scan when it reaches Smith Island. Therefore, the broader rotation in the upper levels of the thunderstorm must be analyzed with higher radar scans to predict the likelihood of a potential or imminent tornado, as most classic tornado producing thunderstorms exhibit rotation 10,000 ft and above. In this case, however, there was a lack of significant rotation in the mid and upper levels of the storm. Most of the rotation was occurring below the radar beam. Ultimately, there was little evidence on radar to suggest a tornado was either developing or actively on the ground. 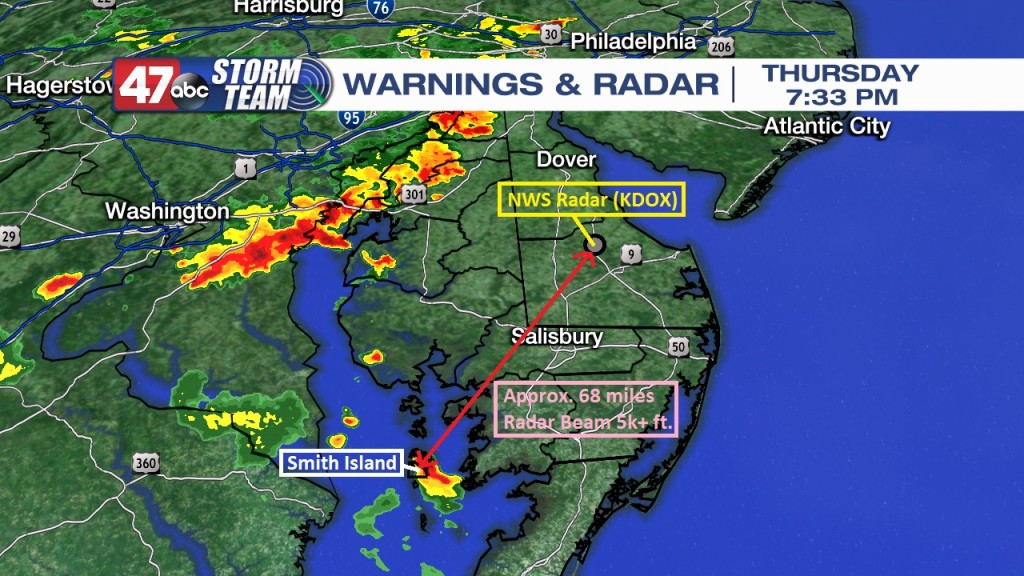 Distance between Smith Island and the closest NWS radar site in Sussex county, Delaware. At this distance, the radar beam is scanning more than 5000 ft. above the surface over Smith Island.

There were other unique factors surrounding this tornado, which the NWS Wakefield office summarizes here: https://www.weather.gov/akq/SmithIslandTornado

Coldest Air of the Season Arrives Next Week

Wind and the New Year

All about the tilt, Earth's tilt