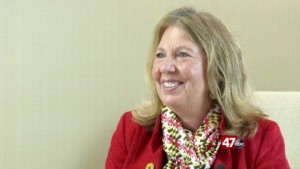 MARYLAND – Although election results in Maryland remain unofficial, State Senator Mary Beth Carozza has taken a clear lead in her re-election. The incumbent Republican holds about 71% of the vote as of Wednesday afternoon. Democratic challenger and Salisbury City Council member Michele Gregory pulled in about 28% of the vote.

“It’s been a total team effort. Team Carrozza involves everybody. We involve people in all three counties, and so [Tuesday] night when we were gathered together; People who have been working the polls, went door to the door, who would help with fundraising, would make phone calls. My family was there, I had high school friends there.”

After making the jump from the Maryland House of Delegates to the State Senate in 2019, Sen. Carozza says she’s ready to continue working for the Eastern Shore. “When I go door to door, there’s no filter. Constituents will tell you exactly what’s on their mind. It’s very clear, what I consistently hear.”

Those priorities include continuing to support law enforcement and first responders, says Sen. Carozza. “Public safety is always priority number one. You really can’t make any progress on education, on the environment, and other priorities unless we have safe communities,” said Sen. Carozza.

Sen. Carozza tells 47 ABC she also plans to take on economic challenges in the 38th District. “There are concerns there. People want to basically have us stay focused on that, especially when we see these escalating gas prices, supply chain issues, and we’re still having some of our smaller businesses recover from COVID-19,” said Sen. Carozza.

“There are three technical high schools in my district: Worcester Technical High School, Parkside CTE, and Somerset Technical High School. They have partnerships with WorWic Community College, Salisbury University, and UMES, and other employers,” said Sen. Carozza. “Those employers are coming to us and saying we have these workforce shortages in every major area; public safety, healthcare, construction, high tech, teaching. We want to make sure our young people know that the opportunities are here on the Shore.”

And as Sen. Carozza prepares for another term in office, she says she is also preparing for new leadership and a new Maryland General Assembly. She says bipartisanship will prove crucial in making a smooth transition.

“I’m looking forward to the next session. I’ve always been able to work in a bipartisan way. As a matter fact, the way that the Maryland General Assembly is set up, you have to work in a bipartisan way to pass anything when you look at the numbers in the make up,” said Sen. Carozza. “My job, I believe, is to make the extra effort with the new governor [Wes Moore], to make sure that he knows of our Shore priorities.”

Beyond that, Sen. Carozza says she feels humbled and honored to be given the opportunity to represent District 38 for another term.

“Public service is job number one for me. Constituent services is job number one. I never ask anyone whether they voted for me or not when I go to assist them. I serve all of the people in all three counties. This is the best Senate district in the entire state of Maryland,” said Sen. Carozza. “The reason this is the best Senate district is because of the people. You don’t look at party affiliation; you look at the people.”