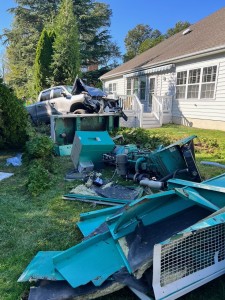 REHOBOTH BEACH, Del. – A man was ejected from his vehicle after crashing into a house Friday afternoon.

The Rehoboth Beach Volunteer Fire Company (RBVFC) responded to the crash on Warrington Road around 2:30 p.m. on October 7th. When first responders arrived, they found a pickup truck that had crashed into a house.

The vehicle had continued without the driver inside about 500 feet, knocking down two fences and smashing into a back-up generator for a sewer pump station, before coming to a stop on top of some small trees, says RBVFC.

The driver was taken to Beebe Medical Center in Lewes, says RBVFC. First responders say two homes in the neighborhood were temporarily evacuated while crews stabilized a severed electrical line, and a diesel fuel leak near the generator.

Fire crews and Delaware State Police were on scene for over an hour. Warrington Road remained  closed while county crews worked to restore the sewer pump station, and remove damaged equipment, according to RBVFC.