“Peaches, I love peaches,” says Dorothy, a judge for the competition.

At the Delaware State Fair peach royalty made an appearance. The queen herself tells me what it takes to hold the crown.

“Ya know just being willing to support fifers and the peach industry and willing to just get out there and tell people about it,” says Josefena Marasco, the peach queen.

And if you need to know the right time to pick a peach, the queen says it best:

“I would say when you know how ripe they are and the color of it…you can smell it and if it’s orange,” says Josefena Marasco the Peach Queen.

To win the peach contest the judges say the recipe has to be just right:

“I would just say that your degree of difficulty that if you’re going to submit an entry for a particular fruit make sure that that fruit comes through on the first bite,” says Jani Long, a judge for the contest.

“and you want to taste I taste in the second bite you want to make sure that whatever you’re making that that peach flavor comes through,” says Dorothy Dempsey, a judge for the contest.

The judges say the winner did just that.

“It was just there was a sponge cake to it, a moose part to it and the peach flavor just came through in the first bite,” says Long.

“Oh my goodness the peach flavor and we all decided that we weren’t going to bake that because it was too difficult we would buy it at a bakery and pay big bucks for it, it was that good,” says Dempsey.

Peach flavored recipes are only one of the competitions being held at the fair.  Tomorrow will be the brownie bar cooking competition so check it out. 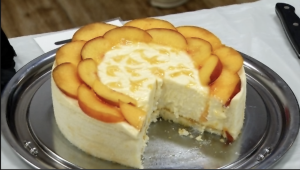 Deadline to apply for Healthy Lifestyles Grant is tomorrow

Habitat for Humanity requesting 600K in funding for fiscal year 2023