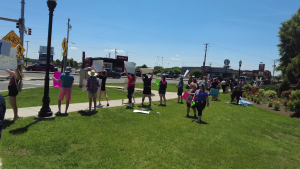 SALISBURY, Md. – “I woke up Friday and was angry at the news and I wanted to go to a protest. There weren’t any and so I made one,” Protest organizer Claire Bohlen said.

Friday,  50 years of abortion protections were overturned by the hands of supreme court judges. Sunday afternoon, community members turned their anger in to a call for action with a protest in Salisbury

“I was in disbelief. I couldn’t believe the would overturn something that has been in place for 50 years,” Bohlen said.

Salisbury City Councilwoman Michelle Gregory says it hasn’t been a matter of if but when, as activist have spoken of a possible overturn for years.

Gregory adds that Maryland already has strong abortion protections in place but missed the mark to strengthen them during the recent legislative session. “Maryland State Senate had an opportunity this past year to codify it by putting it into our constitution and they opted not to because they didn’t think this was going to happen,” Gregory said.

To do that, activist I spoke with say it’s going to take many showing up and exercising their right to vote. ” Federally, we need to at least have 52 to 53 seats in the Senate so we can overturn the filibuster and actually get some work done,” Schablein said.

“And elect good people people and that starts in the primary. That why we’re an organization that’s gets involved in the primary and will work to elect candidates who will do these things.”

“I just wanted to see or rights restored and I would love to see it on a federal level. That’s something that’s going to take a lot more time and a lot more protests than what’s happening today,” Bohlen said.

Activist on the other side of this issue celebrated the supreme court’s ruling and they are considered to be pro-life.

Generally they argue that human life begins at conception and that the human zygote, embryo or fetus is a person and has a right to life.

While many states have codified the right to abortion in their laws, numerous others will likely see an immediate ban of abortion in the coming days.