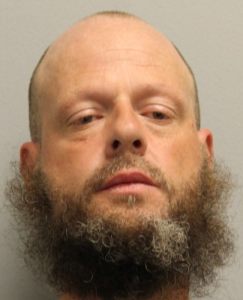 Delaware State Police say around 5:10 p.m., troopers responded to the 20,000 block of Coastal Highway for a theft in progress. A white male suspect was seen going through vehicles on the property, and was confronted by a witness. Police say the suspect then ran toward the Loft apartments across the road.

The suspect found an Infiniti M35 behind the apartment complex and got into the vehicle, according to police. The first trooper on scene saw the victim being dragged as he tried to open the driver side door to stop the suspect from driving away. The suspect led the trooper on a pursuit, westbound on Lewes-Georgetown Highway.

Police say the suspect tried to strike a trooper deploying stop sticks. The pursuit continued to the area of Route 30 and Reynolds Pond Road. Stop sticks disabled the stolen vehicle, and the suspect was identified as Tatman. Tatman was arrested without incident.

Tatman was taken to Delaware State Police Troop 7, and charged with two counts of possession of a deadly weapon during the commission of a felony, and two counts of first degree reckless engenderment. He is also charged with disregarding a police officer signal, motor vehicle theft, three counts of theft under $1,500, resisting arrest, and numerous traffic violations.

Tatman was arraigned at Justice of the Peace Court #3, and taken to Sussex Correctional Institution on $146,353 cash bond.