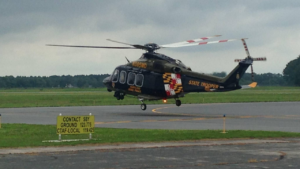 The Chem Jupiter is a 462-foot oil/chemical tanker ship flagged out of Liberia. Police say around 8:45 a.m. Wednesday, the ship was near Bloody Point when it sent out a request for the airlift. The patient’s condition stopped the patient from being put on a smaller Coast Guard vessel.

Once the trooper/paramedic and crewmember were safely loaded into the helicopter, they flew to Anne Arundel Medical Center in Annapolis.