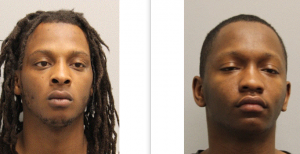 REHOBOTH BEACH, Del. – Two men were arrested after getting into a fight involving a gun and trying to run from police. Delaware State Police say 25-year-old Joshua R. Daniels of Lincoln and 24-year-old Malik R. Rothwell of Ellendale are facing multiple charges.

On December 25th around 1:01 a.m., troopers were called to the Big Chill Surf Cantina on Coastal Highway for a fight in progress. The suspects fled the scene in a red Mitsubishi Outback SUV before police arrived.

Investigators later found out that a 23-year-old female and a 23-year-old male were exiting the Cantina when they were confronted by Daniels and Rothwell. Police say the four got into an argument, and Daniels punched the male victim in the head multiple times. As the female victim was trying to break up the fight, police say Daniels began physically assaulting her as well.

Eventually, Daniels and Rothwell brandished guns at the victims and threatened to kill the  victims, according to police. Daniels then hit both victims in the face with a handgun. Meanwhile, Rothwell fired a round into the air before he and Daniels fled the scene. As a trooper was traveling on Coastal Highway, he saw the suspect vehicle turning onto the road as it exited the parking lot of the Cantina.

A traffic stop was initiated, and the trooper says there was a strong smell of marijuana coming from the vehicle. As the trooper approached the vehicle, Daniels got out. The trooper tried to arrest Daniels, but he ran away. Daniels was taken into custody a short time later. Police found a 9mm bullet in Daniels’ possession. As that search was happening, police say Rothwell tried to also get out of the vehicle and run away. Rothwell was caught and arrested.

Once the suspects were in custody, inside the vehicle police found a 9mm semiautomatic handgun with eight rounds in the magazine. Also inside the vehicle were a Colt Detective Special .38 revolver loaded with five rounds, and a .38 special casing. Police also found 6.02 grams of marijuana, and 0.077 grams of heroin.