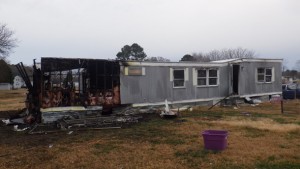 HEBRON, Md. – The Maryland Office of the State Fire Marshal is investigating a fire that broke out in a mobile home Sunday afternoon.

Hebron Volunteer Fire Department responded to 26718 Wood Avenue around 3:46 p.m. after neighbors called 911. When firefighters arrived, they found that a fire had started in the bedroom of a one story wood-frame single wide mobile home. Investigators say the fire was accidental. The fire was caused by combustibles being too close to a space heater.

The fire took about 15 minutes to get under control. Investigators say the fire caused about $15,000 in damage and losses. A family pet pig was rescued from the residence by firefighters. No one was hurt in the fire.