How much snow will Delmarva see this winter?

A Look Back at Last Winter:
The winter of 2020-2021 ended up with 8.4 inches of snow, which is around average, according to the new 1991-2021 climate normals. Temperatures this past winter were above average but not record setting, with December & January being 2 degrees above average and February slightly below average. Despite it not being an extremely warm winter, it was the first time in history where Salisbury didn’t experience lows below 20 degrees. In terms of precipitation, it ended up being the wettest La Niña winter ever.

47 ABC 2021-2022 Winter Forecast:
The El Niño Southern Oscillation cycle (ENSO) is a climate pattern that depends on Sea Surface Temperatures (SST’s) in the central and eastern tropical Pacific Ocean. This year, climate scientists have noticed a cooling of these SST’s, along with stronger easterly trade winds along the equator. Thus, they’ve stated La Niña conditions are present again this year and will likely continue throughout the winter. With cooler ocean temperatures in the Pacific, upwelling occurs along the west coast of the U.S. This pushes the polar jet stream farther north, causing the Pacific Northwest to have a wetter winter, while the South will be drier. Delmarva can experience quick cold spells, depending on how far south the polar jet stream moves. Research for this year shows a stronger La Niña compared to last year, and based on data collected on the strength of La Niñas since the winter of 1949-50, we can expect a warmer and drier than average winter. 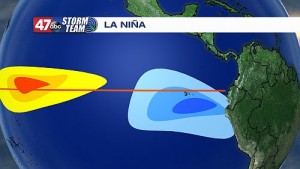 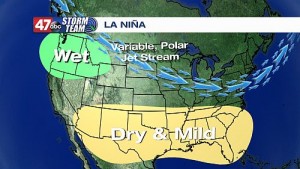 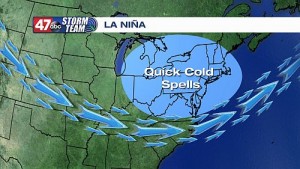 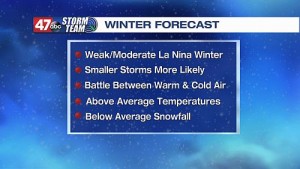 Winter 2021-2022 will be a weak to moderate La Niña. La Niñas overall favor smaller storms rather than large storms. There will be times of cold air this winter but the milder air will always try to invade from the south. This could lead to more rain storms or maybe even ice storms this winter. With a stronger La Niña expected, the chances of having snow earlier in the winter are actually higher, so maybe we’ll have a December snow? White Christmas anyone? Overall, we’re expecting a milder winter with below average snowfall. 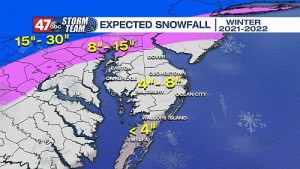 Our official snowfall predictions have Salisbury getting around 4″- 8″ for the entire winter, which is below average. Salisbury averages 8 inches of snow according to the new climate normals. However, all it takes is one big storm to throw off our forecast. Stay tuned.

"There were 200 probably golf ball sized dents in both vehicles:" Family gets hit hard by Monday evening storm