Chesapeake Bay Bridge may get a third location 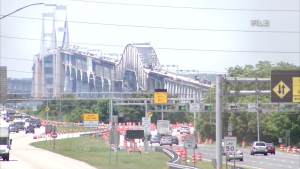 DELMARVA – The Bay bridge is getting a possible third location, and some residents and Broadneck council members aren’t happy about it.
Maryland transportation officials recommended building a new Chesapeake Bay bridge at the site of the existing two spans that cross between Annapolis and Kent Island. Broadneck council members tells 47 ABC, the overall concern is that once the location is selected, no other locations will be considered.
Residents and Broadneck council members say, they strongly believe there are better options elsewhere. However, according to council officials, unless they get massive public support to ask to move the bridge elsewhere such as Cambridge, it’s looking like this could happen. “Our concern is that once they make this selection there will be no additional alternatives no additional corridors examined, and to spend $30 million on that we think is bad,” says Broadneck Council member, Bill Nevel. The President of the council, Patricia Lynch adds, “We’ve had two sessions now of public speakers on both sides of the bridge and almost everybody is totally against this.”
Broadneck council members also say, if you want to give your input, you’re invited to submit comments to Maryland Transportation Authority and the Federal Highway Administration by May 10th.
Categories: Local News, Local Politics, Maryland
Tags: 47 abc, annapolis, bay bridge, because local matters, bridge, broadneck, chesapeake bay bridge, delmarva, kent island, local, maryland, news, wmdt