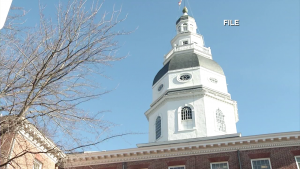 MARYLAND – The Maryland State Senate unanimously passed Wade’s Law Tuesday. The law classifies life-threatening injury by motor vehicle as criminal negligence. A person convicted would have to face a maximum sentence of 18 months in prison and or a $5,000 fine. “This legislation provides a just penalty for survivors like Wade Pusey and Je’Ani Lyles who have suffered life-threatening and life-sustaining injuries as a result of criminally-negligent driving,” said State Senator Mary Beth Carozza.

Before the Wade’s Law passed, the maximum penalty was a $500 fine. The law came about after two Worcester County road workers were hit in a violent crash in 2016. Those workers were Scott Tatterson and Wade Pusey. The crash killed Tatterson, and left Pusey with life threatening injuries. “My parents always taught me that if you believe in a just cause or action, then you keep working it, not for yourself, but for people like Wade Pusey and his family, Je’Ani Lyles and her mother, Carla, and for all the unnamed victims. We are completely committed to seeing this through for the sake of future victims. You keep fighting the good fight,” said Senator Carozza.