UMES introducing a new major, what this means for future students 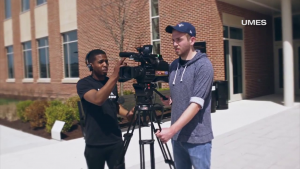 SALISBURY, Md. – A program is in the works at UMES, that could help journalism students land more jobs post graduation.
“It’s unusual for a university not to have a media relations program,” said Coordinator for Digital Media Studies at UMES, Marilyn Buerkle.
Buerkle tells 47ABC,  that’s how it’s been for years… leaving many students to graduate with a Bachelors degree in English and minor in digital media.
“It did sting a little that I had to do as many independent things as I possibly could or I had to take as many independent courses as I can to gain all that experience in media,” said former UMES student, Nadja Cox.
Cox graduated in 2018, with what she says… was a love for digital media. Unfortunately at the time, it was not considered a major.
However things have changed since her graduation. Now, UMES is making it a major, something she says is long overdue.
“Just the name change alone will definitely help students look into UMES,” said Cox.
Faculty say it’s a move that’s critical for students wanting a future in broadcasting.
“This is an important component, it’s one of the kinds of degrees that student look for at a college,” said Buerkle.
“The English department, the professors, the knowledge they have, even the courses, are definitely helpful but it’s always overshadowed because when you look into the university it’s English but people don’t know there’s more to it than just writing,” Cox explained.
Now, for incoming students, they’ll be able to take on this new major right off the bat. It’s something faculty believe will make [students] them more marketable post graduation.
“Because it’s a competitive industry, it seems really important that our students have credentials that leaps off a resume at an employer that says ‘Yep, I know how do to this,'” said Buerkle.
Students with a major in digital media will tackle a variety of opportunities… including hosting a radio show, anchoring campus newscasts, creating graphics, and recording podcasts.
Categories: Education, Local News
Tags: broadcasting, college, graduation, jobs, Journalism, majors, New Major at UMES, students, umes

The Band Organ returns to the Delaware State Fair