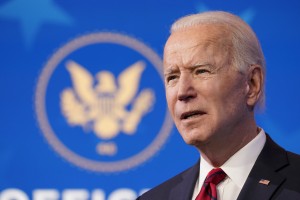 DELMARVA – One of President Biden’s first priorities is sending a sweeping immigration reform bill to Congress. The bill would create an earned roadmap to citizenship for undocumented people in the United States. “Many folks who are undocumented have had to live lives under cover. This allows for people to come out of the shadows and become full members of our community,” said Executive Director of the ACLU of Delaware Mike Brickner.

Under the bill, undocumented people who lived in the U.S. would be allowed five years of temporary status. After that, they could eventually earn a green card if they meet requirements like paying taxes and passing a background check. Three years after that, they would be able to apply. “For the first time I see my people starting to heal from trauma. The trauma of having to hide, the trauma of having to lie, the trauma of being afraid of being caught in those lies,” said Co-Chair of the Delaware Hispanic Commission Charito Calvachi-Mateyko.

The bill also promises to keep families together and decrease the backlog and recapturing unused visas. Plus, it includes a NO BAN Act, which would prohibit discrimination based on religion. More funding for state and local governments, organizations, and educational institutions to expand English learning programs. “There’s parents who don’t have a clue of English, that don’t have a clue of computers having to guide these children that have to remain at home to be protected from the pandemic. Just imagine the dilemma they are facing,” said Calvachi-Mateyko.

The Department of Homeland Security and the Department of Labor would also be required to establish a commission involving labor, employer, and civil rights organizations to make recommendations for improving employment verification processes. “For all those people that work hard to contribute to this economy, that are making this country and making the wealth that others enjoy, it’s only justice,” said Calvachi-Mateyko.

Revamping and updating border patrol policies is also part of the bill. The legislation would adjust budget allocations for immigration enforcement and providing newer technology at the border. The bill would also provide more funding for training and education programs for officers, as well as update use of force policies and care protocols for those in Customs and Border Patrol Custody. “When we have law enforcement rounding up undocumented immigrants, we may have people living in fear that they are going to be criminalized because they are undocumented,” said Brickner.

Cracking down on criminal organizations is also part of the bill. That would be made possible through expanded investigations and increasing penalties against foreign narcotic traffickers and their organizations. The Federal Bureau of Investigation, Drug Enforcement Agency, and DHS would also work with the Secretary of State to improve and expand anti-gang task forces in Central America.

The bill would fund a $4 billion, four year plan to address underlying causes of migration in the region. That includes increasing assistance to countries like El Salvador, Guatemala, and Honduras. That assistance would be dependent on those countries’ commitment to reduce corruption, violence, and poverty. Calvachi-Mateyko says those issues are the catalyst for many undocumented people who come to the United States. “They have to lie to put food and a roof over their heads. They have to lie to work,” said Calvachi-Mateyko.

Here in the United States, the bill would expand and improve immigration court by increasing training for immigration judges, and providing more funding for legal aid and school districts educating children who are unaccompanied due to family separation. Plus, the bill would eliminate the one-year deadline for filing asylum claims. It would also provide funding to reduce asylum application backlogs. Calvachi-Mateyko says on the local level, those changes would provide more opportunities and freedom of mind. “I can see the first effect is the relief of this moral baggage that they carry with them. But it’s also the freedom to be able to apply everywhere – the freedom to be able to ask for services that will benefit the nation,” said Calvachi-Mateyko.

Older Driver Safety Awareness Week: Tips for seniors and their caregivers on Delmarva

Bridgeville crash claims life of one, injures another