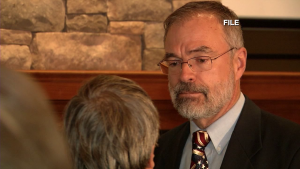 MARYLAND – The calls for U.S. Representative Andy Harris to resign continue to grow. More than 80 Maryland lawmakers signed a letter calling for his resignation. In the letter, 71 House Delegates and 13 State Senators accuse Congressman Harris of interfering with the 2020 election by casting doubt over how trustworthy it was. They also accuse him of instigating the recent siege on the U.S. Capitol.

None of the Eastern Shore’s lawmakers signed on to the letter. But Speaker Pro Tempore for the House of Delegates Sheree Sample-Hughes says she thinks any law maker should be held accountable for any wrong doings. “I certainly can say that others who did not sign believe that this behavior is unacceptable and that this behavior by an elected official warrants some level of reprimand,” said Speaker Pro Tempore Sample-Hughes.

Speaker Pro Tempore Sample-Hughes says that ultimately, it’s up to leadership up in Washington to decide how to handle this situation. “All of us have an opinion, whether it’s at the state, local, county, or city level. We all can sign letters. We can all send them. But ultimately, the leadership in Washington has to make that decision,” said Speaker Pro Tempore Sample-Hughes.

Rep. Harris has said he will not step down. He released a statement that read in part “We did not call for the overthrowing of an election.  Joe Biden will be President on January 20th.  Some of my colleagues, including those still in the Maryland delegation, offered objections in 2017 when counting the electoral votes for President Trump.  Congress is afforded the right to count, and object, to electoral votes, which we utilized yesterday to highlight concerns we had regarding the November election.  There was nothing treasonous or seditious about it in 2017, nor this year.”