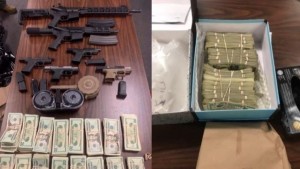 DOVER, Del. – Dover Police say more than 40 Delaware residents have been arrested and charged in connection with a massive gang related drug bust.

The investigation is called “Operation Rise-N-Shyne” because one of the four gangs allegedly involved is the “G-Shyne Bloods.”

The investigation started in February of 2020 after Dover Police made several arrests involving firearms and narcotics. Detectives narrowed in on Dover resident Marquise Mack who is believed to have been one of the organization’s leaders. Police say Mack was supplying large amounts of ecstasy from the Atlanta, Georgia area to Kent County, Delaware.

The operation began in June of 2020, spanned six states and lasted through mid November when a multi-agency warrant roundup was completed. Police seized 28 firearms, more than 15,000 doses of ecstasy, 72 grams of MDMA powder, 12.8 grams of methamphetamine, 3.675 grams of heroin, 1058.49 grams of marijuana, 41.4 grams of cocaine/crack cocaine and $22,679 in drug proceeds.

Dover Police say 20 people involved in this investigation were actively being supervised by Delaware Probation and Parole. Officials say more people may be arrested and charged as this case unfolds.

This article will be updated with more information.