On the afternoon of April 28, 2002, a destructive F4 tornado touched down in La Plata, Maryland. This storm crossed the bay and remained a tornado as it moved into Dorchester county, just south of Taylor’s Island. F3 tornado damage was reported in southern Dorchester county where a house was destroyed, and F0-F1 damage was reported as far east as Quantico, MD in Wicomico county. This day in particular spawned numerous tornadoes west of Delmarva, and was part of a much larger tornado outbreak that started a day or two before. Luckily, no life was lost on Delmarva, but five people were killed in La Plata, MD and over 100 homes were destroyed before the tornado crossed onto Delmarva.

Below is a look at where the storm originated earlier than day. It started well to the west out in West Virginia, crossed into Virginia where it briefly touched down, then traveled across northern Virginia as a funnel cloud, then touched down as it moved over the Potomac River into Maryland where it hit La Plata. This storm traveled a long distance, eventually ending its damage path in Wicomico county. 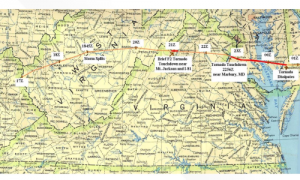 Attached below is also a look at some arial footage that shows tha path of destruction the tornado made when it was at its strongest. 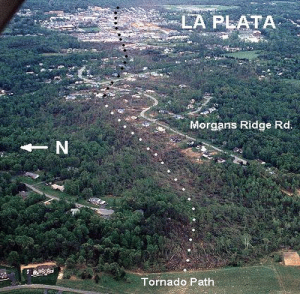 The National Weather Service rated the tornado an F4, with winds up to 206 mph. If this same tornado struck today, it would be rated an EF-5 on the new Enhanced Fujita rating scale.