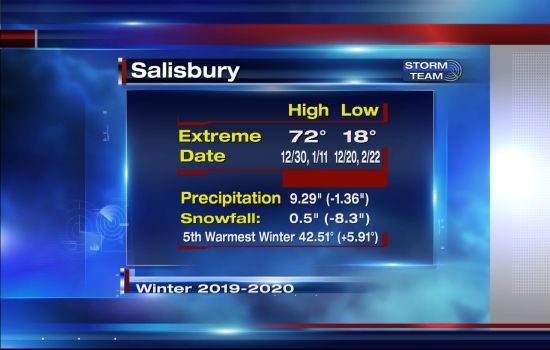 If you felt that we did not have much of a winter on Delmarva, then you are right. The unseasonably mild winter pushed Salisbury within its top 5 warmest.

2019-2020 will go down as the 5th warmest winter in Salisbury at 42.51°. Interestingly, this winter missed being the 4th warmest, back in 2015-2016 by only 0.01°. Our highs were well above average by 6° for the entire season compared to our lows which were at 4.3°. If we break down the numbers even further, especially on the highs, we had 57 days at or above 50°. February had the most days recorded at or above 50° at 21, which is slightly over 70% of the month. Also this year, Salisbury did not record a high temperature at or below freezing, with its coldest high of 33° on December 19th. All 4 stations (Georgetown, Salisbury, Ocean City & Wallops) recorded at least one day at or above 70° this winter; which was set record highs during the weekend of January 11th & 12th.

While our lows were not as extreme from the departure to average, it did tie for the warmest “coldest low” recorded in a season at 18°. The 18° took place on December 20th & on Febraury 22nd, tying the 1997-1998 for the warmest “coldest low” for a season. The season only had 27 days at or below the coldest average low for the year at 26°. January was the coldest of the 3 months, dipping at or below 26°, for 12 days. Lows at or above 40° were almost as common as the below average ones at 22 days, with February having the most warm lows at 9.

Rainfall was becoming an issue early in the season, as the Mid Shore was entering a moderate to severe drought in the months of December & January. Rainfall began to improve slightly from a dismal November where rainfall was less than 1″, to over an 1″ in the month of December in Salisbury. The only areas unaffected from drought conditions were at the beaches, where rainfall amounts remain average to above average during the summer and early fall months. Delmarva’s luck finally turned around for the better in January, as rainfall amounts hovered around average and continued into above average in February. The quick turnaround in January, helped alleviate the drought situation on Delmarva before the end of the month. Rainfall for the entire season was around 9″, which is slightly below average in Salisbury. The other weather stations on Delmarva fared better this season, with above average rainfall for at least 2 of the 3 months this winter.

What put a real damper for this winter, was the lack of snow. The only major snowfall in Salisbury took place not during the winter, but in the fall back on November 12th, where 0.5″ was recorded, with the following 3 months receiving only a trace each month. The heaviest snowfall for the entire season occurred in our southernmost county of our viewing area in Accomack County, down in Virginia, where Wallops Island recorded 2.2″ on the 20th of February. Multiples reason can explain the lack of snow this season, ranging from bad timing of dry air dominated during our coldest days of the season, to even unusually low amount of coastal storms (Noreasters).

While this may have been a disappointing winter for snow lovers, it was a great one if you are a fan of the fall or spring-like air. Now that the calendar has flipped into March, our temperatures continue to be above average, thus likely ending our chances of seeing snow for this season and looking hopeful for the next winter. As you wait the next chance of snow, in the meantime follow our Storm Team for all the latest weather updates.