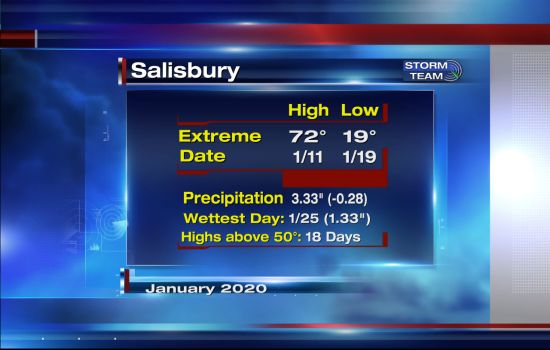 The month of January consisted of mild temperatures with brief cold spells, while the rain finally began to pick up.

Temperatures for the month were above average for the entire peninsula between 5.5° – 6.5° at the 4 weather stations. Georgetown was the warmest from average at 6.5°, followed by Salisbury at 6.2°, and finally both Ocean City and Wallops at 5.7°. The month began mildly in the upper 40s and 50s for the 1st 8 days of the year, with seasonable lows mostly in the 20s. The 1st highs below average took place on the 9th, with temperatures in the upper 30s to low 40s. 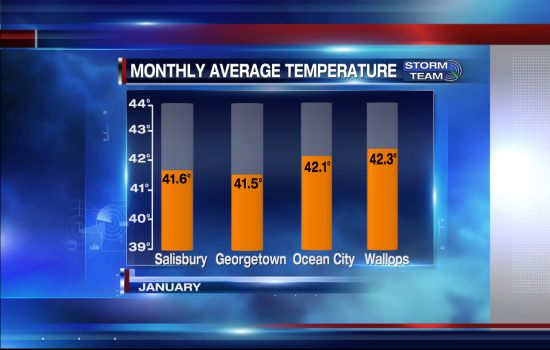 Unfortunately, the chill did not last, by the 10th, temperatures rebounded by 20° into the 60s. The warmth expanded even further the next 2 days. The weekend of the 11th & 12th was a toasty one, as Salisbury broke record highs both days in the low 70s. The 2nd half of the month would change the temperature pattern a bit, with a more spells of chilly air, as highs would be more in the 40s, with the occasional day or two in the 30s. Lows for the 2nd half of January would see a good stretch of 6 out of 7 days with readings below 25° in Georgetown & Salisbury, which is below average. The month as a whole finished with 18 days at or above 50° and 23 days above the average high; while lows at or below 25° occurred on 9 days. 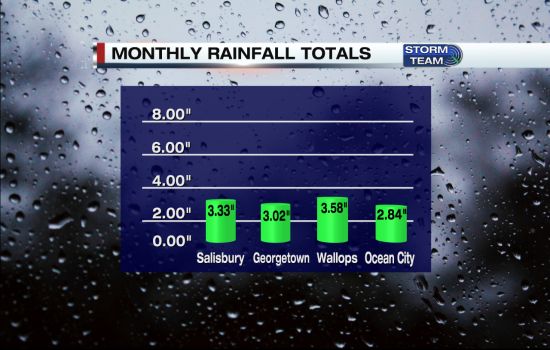 Rainfall amounts this month were slightly below average in Salisbury (3.33″) & Ocean City (2.84″) but slightly above normal in Georgetown (3.02″) & Wallops Island (3.58″). The good news is that all 4 stations received at least 2.75″, something all 4 stations have not done since October. Salisbury’s struggles with rainfall turned around to the point where this month’s amount surpassed the totals of November & December combined. January, however, was a snow-less month, not even receiving a trace of snow, but the 2nd straight month without a measurable amount of snow. Georgetown also received no snow, but Wallops recorded a trace on the 18th. Sadly, the abnormally dry conditions on the drought monitor expanded from central Delmarva in December, to northern & central Delmarva in January. The increase was likely due to the abnormally mild to warm temperatures experienced in late December and this month. 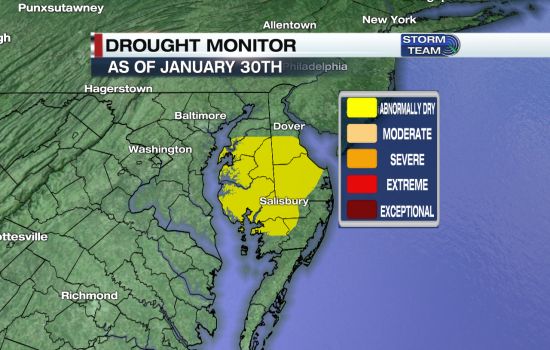 The month of February is being predicted by the Climate Prediction Center to have both above average temperatures and precipitation. While this forecast from the CPC will help with the drought, but might not help the chance of winter weather. This could lead to another snow-less month, and it does not help that even Punxsutawney Phil predicted an early start to spring this Groundhog Day. So, for all those snow lovers, winter is not over yet and things can change as we get deeper into February and even into March. In the meantime, make sure to stay tuned with our Storm Team for the latest updates.