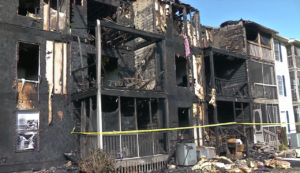 REHOBOTH BEACH, Del. – An early morning fire has left an entire community in shock, residents without a home, and fire officials wondering exactly what happened.

“I was very upset to see my place just going up in flames yeah, I was upset,” said Edna Heath.

Remnants of burnt and charred wood still emitting smoke nearly 10 hours after a fire destroyed an entire condominium within a matter of minutes.

“I was terrified. I really was because the wind was really taking off and it was spreading pretty fast,” said Kim Motter.

The blaze, which broke out around 1:00 AM Friday morning, wiped out an entire row of beach haven condos. Giving residents inside barely enough time to get out.

“It’s frightening to be in a house and see all the flames shooting out your window at and your door,” said Heath.

Edna Heath has lived in her condo for the past six years, and she tells 47 ABC she’s never seen anything like this before.

“I am 81 years old and I hope I never experience another fire again in a building. That was my first,” said Heath.

According to the Delaware State Fire Marshall’s office, everyone inside was able to escape unharmed, but they’re still working to find out why and how this fire even started.

“We looked over here and we were just praying that everybody was out,” said Motter.

And despite this tragedy neighbors are already stepping up to the plate to help anyone in need.

“The neighbors will gather around here and we’ll see what we can do for everybody,” said Motter.

Residents add that although they’ve got a long road to recovery ahead they say they’re thankful for that they’ve got an entire community that’s behind them every step of the way.

Officials say the fire is still under investigation and has caused nearly $1,000,000 worth of damages.