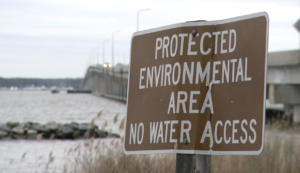 CAMBRIDGE, Md. – A bill that would prohibit eastern shore watermen from catching oysters in five designated sanctuaries is heading to Governor Larry Hogan’s desk. And while nothing is set in stone just yet. watermen here on the shore say this could have a major impact on their business.

“We just don’t believe that what they’re doing is fair or even legal,” said Dorchester Seafood Heritage Association, Bob Whaples.

Frustrations are running high for local watermen, as their window of opportunity to harvest oysters grows smaller. Now that the Maryland General Assembly has passed a bill that would permanently protect five oyster sanctuaries in the state.

If Governor Hogan signs the bill into law. Watermen will be prohibited from catching oysters in some of the most popular areas that will be designated as sanctuaries. Including Harris Creek, The Little Choptank River, The Tred Avon River, The St. Mary’s River and the Manokin River.

“These sanctuaries are just sitting here. Oysters don’t live forever, and they’re just going to die and that’s not doing anybody any good,” said Whaples.

Seafood businesses in the area who heavily rely on watermen to provide oysters say this piece of legislation will hit them where it hurts the most, they’re pockets.

Watermen also say with these new restrictions, they’ll have to travel further to find oysters just to stay in business.

“We’ve got watermen that’s sailing from hoopers island going all the way to the western shore to make a days work and that’s just crazy,” said Whaples.

Yet, whatever the outcome, eastern shore watermen say they’ll somehow make it through.

“Watermen are pretty resilient people we always seem to make out and get by,” said Whaples.

Supporters of the bill say these sanctuaries are critical to the recovery of the state’s oyster population who they describe as natural filters that help improve the quality of our waterways.