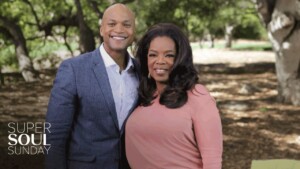 Photo courtesy of OWN.

ANNAPOLIS, Md. – Before delivering his inaugural address, Governor Wes Moore was introduced by a personal friend, who also happens to be a world-famous icon. Oprah Winfrey took to the stage Wednesday morning, greeting the crowd of thousands with a vibrant “Hello, Maryland!”

“Call me if you need anything.”

Gov. Moore and Winfrey first met in 2010. Winfrey invited Gov. Moore to her talk show to discuss his then recently published book, “The Other Wes Moore”.

“I was so impressed, even then, by his integrity and his wisdom,” said Winfrey during her introduction. “He was wise beyond his years. He knew who he was, and he had a vision for who he intended to be, and how he wanted to serve.”

From there, Winfrey says their friendship blossomed. It was on January 6th, 2021, as the Capitol insurrection was unfolding on television across the nation, that Gov. Moore told Winfrey he planned to run for office.

“I turned [the news] on and said, ‘Look at what’s happening. You want to run in this climate?’ And he said, ‘Exactly,'” said Winfrey.

“This might be his first day as an elected official, but Wes Moore has been a public servant his entire adult life,” said Winfrey on Wednesday. “I trust you, [Gov. Moore]. I trust your vision, I trust your leadership. And, I want [Marylanders] to know you can trust him, too.”