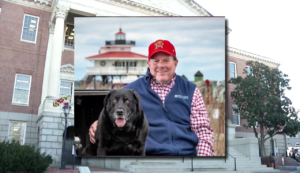 ANNAPOLIS, Md. – The start of the 445th Maryland General Assembly session also meant the start of Delegate Tom Hutchinson’s political career. The Republican political newcomer was chosen by voters in District 37B. The district stretches through Caroline, Talbot, Dorchester, and Wicomico Counties.

“I’m feeling fantastic. This is ten months in the making to finally get to this day. It’s a beautiful day, and I couldn’t be happier,” said Del. Hutchinson ahead of being sworn in Wednesday. “It really makes for some great relationships on both sides of the aisle, and work together, and hear what my constituents want, and work and fight for them.”

Along with being sworn in Wednesday, Del. Hutchinson was also assigned to the Health and Government Operations Committee.

“One of the things I make sure we bring back to the Eastern Shore is quality health care, whether that be mental health, inpatient, or outpatient health,” said Del. Hutchinson.

“There’s a lot of surplus money out there that I fear people want to have their fingers on. But, I think it’s important for us to make sure that’s spent wisely, and in a timely fashion,” said Del. Hutchinson.

Legislative priorities aside, Del. Hutchinson says he’s excited to learn the ins and outs of Annapolis.

“When I had my one on one with Speaker Jones back in December, she asked me what one of my weaknesses is,” said Del. Hutchinson. “I looked at her and I said, ‘I just don’t know Annapolis. This is my first elected role that I’ve ever had.’ She actually laughed and smiled, and said ‘That’ll actually do you well. Being from the outside, just be yourself.’ That’s what I plan to do.”