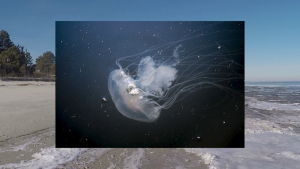 MARYLAND – Beachgoers may notice some unique creatures circulating in the Chesapeake bay that will change what they pack in their beach bag.

Sea nettles or jellyfish are reportedly being seen more in the bay. What’s unique about this current species, is the current jellyfish in the bay are native to the area making them ‘bay sea nettles.’

Although these captivating creatures may catch your eye, experts are also reminding people of the danger their sting can bring, and how to share the road or ‘water-way’ with them. “The first thing you should do when you encounter a sea nettle is just admire it, they’re gorgeous, they’re graceful, they’re majestic they’re not going to aim for you. They don’t know you’re there so they’re not going to bother you intentionally but they can’t really get out of the way either,” says Jana Davis, President of the Chesapeake Bay Trust.

Davis also tells us, jellyfish aren’t great swimmers, so sometimes just moving out of the way if you see one can help. However, if you are stung, make sure you have on hand baking soda, a scraper of some sort, meat tenderizer, anything to help alleviate the pain.

Now jellyfish haven’t been seen in abundance for a few years, and it could be due to water temperatures or less rain. Whatever the case may be, Davis tells 47 ABC, seeing species like jellyfish return is a good sign of the efforts to restore the bay. “We’re turning the page, we’re turning the corner on Chesapeake Bay restoration and protection, we really are seeing improvements knock on wood that those continue.” She adds, “Because there are so many people playing a role and more and more funding for efforts of this nature, we are starting to see improvements in the Chesapeake bay and that’s going to help all of these species that we care about.”

A sign that sometimes wildlife has to work together. So if you’re in the Chespeake bay and see a sea nettle, just let nature do it’s thing.