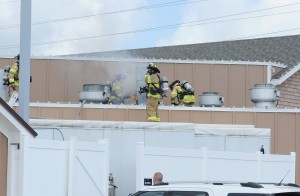 REHOBOTH BEACH, Del. – A fire that broke out at Thompson Island Brewing Company is being investigated by the Delaware State Fire Marshall.

Rehoboth Beach Volunteer Fire Company and Lewes Fire Department responded to the scene on Coastal Highway around 11:40 a.m. on August 28th. When units arrived, they found smoke and flames coming from an exhaust hood on the roof.

Fire officials say a wood burning grill unit inside the kitchen was extinguished, and firefighters were able to contain the fire to the hood system on the roof. All customers and staff were evacuated from the building. The scene was cleared in about an hour.