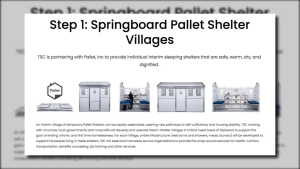 GEORGETOWN, Del. – Through collaborative work, a project is helping those who are homeless transition into a self-sufficient lifestyle, and it all starts with housing which is being made possible through tiny homes. “So our goal is to make that person whole, and housing is the first step,” says Bernice Edwards, Executive Director at First State Community Action.

Homelessness; A problem the world continues to face but right in Sussex county, some organizations are making sure it’s a problem that can be solved. “The idea here is that everybody can be housed, and until they are housed it’s awfully difficult to work on the other aspects of their life. So that’s where we’re headed towards,” says Judson Malone with Springboard Collaborative.

Malone has dedicated his time to addressing the ongoing homeless population and the lack of places for them to go. “The goal that we have and the goal that the town has and the town council has is we’ve got to do something with these people that have been chronically homeless for years and living literally in tents,” says Malone.

Through a partnership between Springboard Collaborative and First State Community Action Agency, a project was adopted, the Pallet Program. The tiny homes have paneled aluminum homes like small sleeping cabins that are about 64 square feet, one or two bunk beds, air conditioning heat, and a low barrier shelter. “It does require a level site so we’ll have everything nicely leveled out and then they’ll just boom boom boom put pallets up and in weeks we’ll have a whole village here,” says Malone.

Malone also tells us, the village in the works is a part of a bigger picture, and it’s more than just giving them somewhere to live for a few months. “What we are going to do is put an engagement coordinator with them every day individually, work on their individual plan, everybody will be different,” says Malone. He adds, “So we want them constantly focused on the next step in their life and we will respect them in a way that’s up to them to decide what their next steps are.”

That’s where First State Community Action steps in; An organization focused on re-shaping people’s lives for a path to success. “Whatever needs that they need, we are meeting the people where the are and when you meet them where they are, then you can start to work at a process and a program,” says Edwards.

Community engagement coordinators will work with those in the Pallet Program to set goals whether it be permanent housing, or even getting and maintaining a job. Although the housing may be free for individuals, it comes at a cost of actively working to better their lives. “You don’t throw people away, you just work with people where they and make sure that we are doing the humanly possible thing that we can do,” says Edwards. Malone adds, “So we want them constantly focused on the next step in their life and we will respect them in a way that’s up to them to decide what their next steps are.”

The goal is to have the pallets up and ready by October, or November at the latest so those who are homeless can get into the housing before winter.

While the program only allows for single individuals, they’re hoping they can eventually create a tiny home village for families as well.