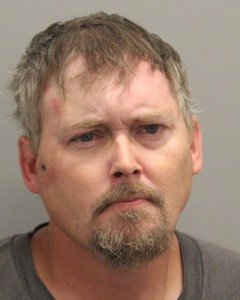 Around 5:57 p.m., a trooper on patrol spotted a gray GMC Sierra traveling westbound on Charles Polk Road, near John Clarke Road. The driver, later identified as 43-year-old Charles Comegys, appeared to be falling asleep behind the wheel, as his truck hit a stop sign, according to police.

The trooper attempted a traffic stop, but police say Comegys did not stop. He continued northbound on South Dupont Highway, and the trooper saw him throw a bag out of the vehicle and onto the road. Police say Comegys committed several other moving violations before coming to a stop on Old Nort Road, west of Old Camden Road.

Comegys showed signs of impairment during the stop, according to police. The trooper initiated a DUI investigation, and Comegys was taken into custody. A search of his vehicle revealed drug paraphernalia. The discarded bag was recovered, and police found 31.68 grams of suspected heroin inside.

Comegys was arraigned at Justice of the Peace Court #7, and taken to Sussex Correctional Institution on $62,406 cash bond.