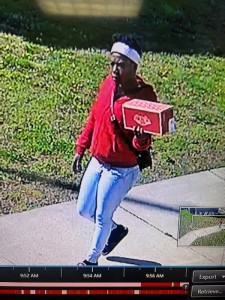 LAUREL, Del. – Laurel Police are asking for the public’s help in identifying a theft suspect.

Police say on April 8th, around 10:14 a.m., officers were dispatched to the 300 building of Carvel Gardens Apartments for package theft. Surveillance video revealed the suspect leaving the area holding the package in question.

The suspect is described as a Black female, between the ages of 20 and 30. She is approximately 5’6″, weighs 150 pounds, and is seen wearing a red jacket, blue jeans, and black flip flops.

Anyone with information about the case is asked to contact PFC Karlik of Laurel Police at (302) 875-2244. PFC Karlik can also be reached at shane.karlik@cj.state.de.us.