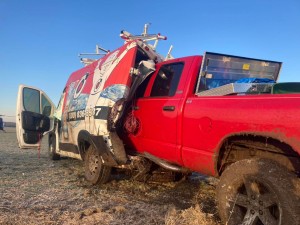 The Ellendale Fire Company says around 7:48 a.m. they were called to an accident in the area of DuPont Boulevard and Beach Highway. When crews arrived, they found a pickup truck that had been involved in a police chase, and rear-ended a work van at a high rate of speed.

Crews worked to stabilize the vehicles and treat patients on scene. One subject was taken to Bayhealth Medical Center, and two others were treated on scene. Carlisle Fire Company, Sussex County EMS, and Delaware State Police Aviation Section also assisted in the response.