SUSSEX COUNTY, Del. – Laurel High Schoolers are reaching out to senior citizens in the first state to make sure they feel remembered during the holidays.

Officials with Harbor Health Care and Rehabilitation Center (HHCR) in Lewes say the residents there feel like a forgotten population following the isolation that came with the pandemic. That’s why a new program at Laurel High School is allowing students to reach out and create connections with those who need them most. Tonya Burton, the administrator at the senior center says, “I just think the younger generation realizing that the elder are wise people and still need attention,” Burton adds, “They should give them the attention that they still need.”

Students are putting pencil to paper and giving senior citizens something to smile about for the holidays. “I mean they’re so young and a lot of youngsters don’t realize what goes on when we get to be antiques,” says a resident at HHCR, Jerry Merrick. She adds, “It’s wonderful for them to take the time for us and you just can’t complain.”

Students we spoke with tell us they felt inspired to write the letters because of their grandparents. An 11th grader, Mellyion Foreman says, “They didn’t really have anybody to talk to and I just wanted to talk to them.” Comaryiah Williams, a 10th grader adds “I wrote the letter so they know there’s somebody out there thinking about them and they’re just not in there alone.”

Another 10th grader, Takajah Bailey tells 47 ABC, the ability to help students participate in more than just education is enlightening. She says the connections they’re making, aren’t something some schools are doing. “I feel like me reaching out would make them feel like they have more communication outside of the nursing home instead of inside,” says Bailey. She adds, “So the bonding that some children have with the teachers encouraged them to get out there and do more good things for people because some people don’t have that at home. ”

Merrick says, seeing these letters is a true Christmas miracle after the year they’ve had. “They’re so sweet, this child signed it with a heart and it makes you want to cry.” Burton adds, “Christmas hasn’t been the same for the last couple of years last year and this year, I’m not going to say we’re back there yet but it does make a big difference.”

High Schoolers we spoke with also say, this program gets them involved with community members who show them how meaningful a warm smile and pleasant conversation can be. “Especially now, a lot of people feel unwanted and that they’re not really needed and I feel like it’s important to let them know that they are,” says 9th grader, Isabella Banks. Another 9th grader, Aleitha Deshields adds, “You should always check up on other people and it’s inspiring other students to do it.” 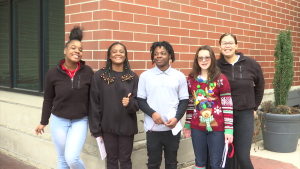 We’re also told Laurel High Schoolers and teachers plan to continue reaching out to senior citizens. “Whoever the letter went to, I just want them to write me back,” says Foreman. Merrick adds, “They said we can write back so we’ll do that too because we have lots of time.”

There were 155 letters written to the residents, and we’re told the school hopes to continue reaching out to other nursing homes.