Wico. Co. fair highlights the return of small businesses in their marketplace 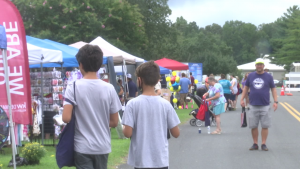 SALISBURY, Md. – Now that the Wicomico County Fair has returned, businesses are also getting a chance to showcase what they’ve been working on, “Probably what we’re most excited about the past year, it was really hard for everyone especially small businesses,” says Zach Evans, Chairmen of the Wicomico County Fair. He adds, “Part of what we aim to do is ride free entry and free parking because we don’t want to tax people to come and enjoy the afternoon. We rather them spend those dollars on supporting local businesses and vendors.”

Fair vendors items for sale included, jewelry, homemade items, clothing, and much more. We’re told, it doesn’t matter how old you are as long as you have something to sell. Young businesses owner, Julia VanMeter tells 47 ABC, “It’s really cool because a lot of people can just walk around bunch of different things that people make and sell.” Her cousin Sarah Wright, owner of Sarah’s Creations adds, “I like when people see my products in their face lights up because they’re pretty.”

Now those with the Wicomico County Fair say they’re always looking to add more businesses, and organization in hopes of expanding their marketplace. “I think we missed that little feeling of being able to get back together and congregate and sort of celebrate the things that we love about life on the lower shore. The county fair has always been a great venue to do that,” says Evans.

However VanMeter and Wright tell us, this year it’s more than just returning to the fair to sell products, it’s about honoring a fallen family member. A father to Julia, and an uncle to Sarah, lost his battle to cancer. Now they say they’re collecting profits to donate to Relay for Life. “We just want to raise awareness and donate so we can what’s the word out there so that more people understand,” says VanMeter.

We’re told although it’s difficult losing a family member, just being able to do what they love, making people happy with their products, and most importantly, honoring their father and uncle is what the fair really means to them. “I’ve lost so many family members and so I would just love to raise more money so that others don’t lose their family either,” says Wright.

The final day of the Wicomico County Fair is Sunday, August 22 beginning at 12 p.m. If you want to find out how you can be a part of the fair next year, or want a schedule of events just click here.