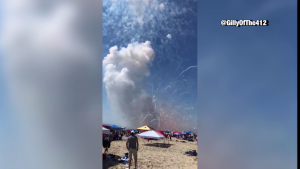 OCEAN CITY, Md. – The 4th of July started with a bang in Ocean City. Sunday morning a truck transporting fireworks was unintentionally set off, causing an explosion that could be seen and heard from blocks away. “We didn’t think anything of it, but we started seeing ambulances and fire departments and crews coming out and police coming through, and we just sat on the balcony and watched everything unfold,” said witness Amy Jenkins.

Jenkins says her family was in Ocean City for 4th of July weekend like they do almost every year. However, Sunday they saw something they’d never seen before. “I’m hearing different stories and I just want to make sure no one got seriously hurt, that’s more important than anything the fireworks whatever,” said Jenkins.

The Ocean City Fire Department says the employees who were near the blast only suffered minor injuries. The fire department says more people could have been hurt if it hadn’t been for the safety perimeter already set up around the fireworks. No beach goers were hurt.

OCFD public information officer Ryan Whittington says, fire marshals are investigating whether the firework malfunction was a human error or a product error.

However, as investigators work to figure out what made everything go up in smoke, town officials decided to cancel all other fireworks displays for the day, leaving some disappointed. “It’s crazy, everybody comes down here for 4th of July weekend and now the fireworks are cancelled and everything and half the boardwalk is shut down and the beach and everything, yeah it’s just crazy,” said Jenkins.

Whittington says the other fireworks were cancelled out of an abundance of caution. “We don’t want to host a show on the north of the town with the same set of fireworks that came from the same place,” said Whittington.

Whittington adds Sunday’s explosion is a prime example of why the fire company advises residents not to bring their own fireworks. He say’s they’re fragile devices and people can get seriously hurt if the right precautions aren’t taken.

The fire department also thanks residents for being patient and understanding about the cancellation as they continue to investigate.