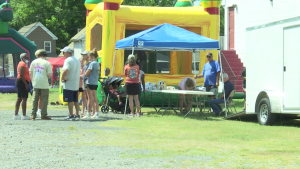 CAMBRIDGE, Md. – The first ever Unity day was held in Cambridge on Saturday. We’re told this was all in the hopes of not only bringing people together, but ending the violence and bringing some light to the city. “It’s a big unity thing that’s what we focused on, it’s just bringing our community together on some good terms,” says Buddy Ennals, co-owner of Groove City mini mart and event organizer.

Event organizers tell 47 ABC, they were able to put together Unity day in just three months, of course with some help from the community. They say in addition to shining a light on the city and addressing the violence, they hope to support the youth through these efforts. “We can’t stop the violence but we’re trying to make sure at least one day out of the year we can come together and put smiles on our communities faces,” says Isaac Adams, co-owner of Groove City mini mart and event organizer.

However, organizers tell us the recent violence plaguing the city is only pushing them to do more. “We’re trying to tell these kids that are walking outside of the house with a gun is not cool that’s not a chain that’s not an accessory that’s not your wallet that’s an easy five years in prison,” says Adams. A young community member who goes by ‘One-Three’ comments on the violence and says, “Man, you all are killing for no reason, couldn’t be me man.”

We’re told, event organizers made contact with celebrities, private artists, and community leaders to come out and help in their efforts. “I’m excited to see all the young artists on the stage today, you all can go do your thing,” says One-Three.

Although the recent violence was addressed at the event, community members tell 47 ABC, they were just honored to be apart of the day and see a better future for the city. “We try to show them that we are going to bring them hope because we believe. we ain’t going anywhere,”  says Ennals. “We’re just coming together and we’re going to show the city and show the whole Eastern Shore Cambridge is not bad, this is Groove City,: says Adams.

Event organizers say they hope to hold this event every year, and that they’re thankful to live in a city that supports their push for change.

All things fun for the Fall season, Wright's Market ready to offer more activities this year