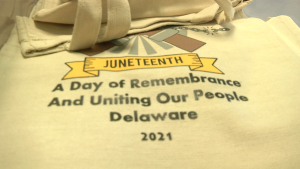 GEORGETOWN, Del. – For some, this coming Saturday is just another Saturday, but for many they’re celebrating the emancipation of slavery in the U.S. also known as Juneteenth. Places like the Richard Allen School, and now the Richard Allen Memorial are doings more than just events, they’re giving back to the African American youth and the community. “I came here to be inspired, and every time I come here I’m inspired,” says Delaware state Senator Tom Carper.

Coalitions like Richard Allen tell me, Juneteenth goes beyond just a celebration, it’s about constantly bettering the community. A former student from the school says it’s more than just a building, it’s a piece of history. “Doing this thing at Richard Allen, it helps connect Sussex County,” says Solomon Henry. He adds, “My parents letting me know we come here to get an education, and when we left the school we were prepared to meet the outside world.”

Those with the coalition tell me, their work in the community is focused on youth and providing them with keys to success. The school which was formerly only for black students during segregation, now provides a resource for the community to learn their history and host events such as Juneteenth. “It gives us an opportunity to reach out and make sure people understand the culture and what we are doing with our Juneteenth celebration,” says Bernice Edwards, Executive Director at First State Community Action Agency.

We’re told Juneteenth will continue to be celebrated every year, but their work is never done in the community and they hope this event brings light to the work needed to bring everyone, white and black together. Whether that be through community partnerships, clean up events, learning resources or after school programs. “This community has so much history that we want to make sure that we are able to allow people to come here and see some of that history,” says Jane Hovington with the Richard Allen Coalition.

By doing that, Sen. Carper says that will help us continue the fight for equality. “It’s a battle that’s still being fought today and everyday, and we have to realize that and just keep up the fight.”

Now those with the Richard Allen Coalition also tell us, with the recent establishment of Juneteenth as a national holiday, they say they think this is the start of some change in America.

After meeting with Sen. Carper, the Richard Allen Coalition made the senator an official partner, and thanked him for his work with the community and his fight for equality.

Their Juneteenth celebration will be held at the Richard Allen school in Georgetown, Delaware from 11 to 5 p.m.