GEICO Skytypers gear up for the annual OC air show 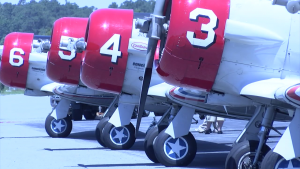 BERLIN, Md. – The annual Ocean City air show is back this year and one of the teams preparing is the GEICO Skytypers and 47 ABC’s Jordie Clark got to tag along on a ride, and learn about what audiences can expect this year.

Military performers, WWII planes, exploding maneuvers and now just add some great weather and pilots tell us, this years air show is said to be a blast. “It’s starting to open up now and people are coming out and things are getting back to normal so it feels great, it’s good to see the crowds coming back out to the air shows,” says Chris Orr, one of the GEICO Skytypers pilots.

With a modified air show last year, pilots say this year they’re expecting more heads in the crowds and more motivation for them, “It’s great to be back it’s great to perform in front of everybody and it’s good to see the crowds again,” says Orr. Jordie got a chance to fly in one of the Skytyper planes and says the experience was one for the books.

After Jordie suited up, she hopped in the plane and took off with her pilot Orr, and says it was an unforgettable experience. The planes dipped, dived and  a look over the the water as well as Ocean City. These WWII planes used to be used for fighter tactics but now they’re really just used for entertainment, keeping pilots skills sharp, and most importantly, ‘typing’ letters in the sky with smoke.

However Orr tells us, he’s been dreaming of flying forever, “My dad brought me to the air show when I was five and I had so much fun that I grew up and became a navy jet pilot and now I’m doing this so I changed my whole life,” says Orr. “You really feel like you’re flying, you’ve got the canopy open you get to experience that, experience going fast, you get to feel the wind going by, it’s awesome.”

Ore also tells 47 ABC, he’s been doing this for years, but his favorite part is just improving his flight skills every time he’s up in the air. A lesson he hopes lots of people can take part in, especially after this past year. “No matter how how many times you do it you can never do it perfect but you can always get a little bit better you can always strive for perfection but you never get there so it always keeps you working hard,” says Orr.

You can watch the GEICO Skytypers Air Show Team in the Ocean City Air Show this coming weekend.

Click here for information on the Ocean City Air Show.