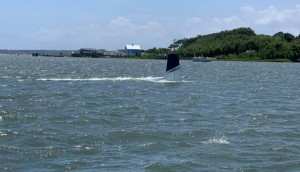 OCEAN CITY, Md. – Five people were rescued from the Sinepuxent Bay after their plane went off the runway and into the water this afternoon. Just before 2 p.m. Maryland State Police were called for a private plane crash near the Salisbury Ocean City Regional Airport. Police say the pilot has been identified as 25-year-old Matthew Cortigiani of Utah.

Cortigiani told police smoke was filling the cabin as he tried to shut off the plane. That’s when police say he turned around to try and land at the airport. But the plane bounced while landing, and went off the runway into the bay. First responders rushed to get the 5 out of the water. One of the passengers was taken to Tidalhealth Peninsula Regional in Salisbury for treatment.

The National Transportation Safety Board and FAA were notified. The Worcester County Bureau of Investigations and FAA are investigating the crash.