‘Save the bunnies’ virtual 5k fundraiser 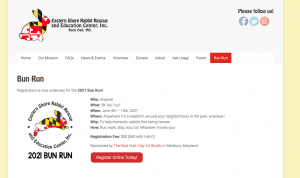 SALISBURY, Md. – In an effort to save bunny rabbits, a local organization called Eastern Shore Rabbit Rescue and Education Center (ESRREC) teamed up with The Mud Hud to host a virtual 5K run.

We’re told the organization is devoted to helping abandoned pet rabbits in Maryland through shelter and care. Now from June 4th through the 13th, the organization and The Mud Hud are asking people to participate in what they call, a “bun-run.”

Proceeds will go to helping domestic rabbits find loving homes, and anyone can participate from anywhere.  “Similar to the way cats and dogs end up in rescues and shelters, people don’t understand the care that is required for a rabbit, or they get tired of taking care of it, or they just abandon it in the street and that’s when we step in,” says Kelly Stottlemyer, Lower Shore Coordinator for ESRREC. The owner of The Mud Hud, Constance Melvin adds, “Those that don’t want to run it, they can walk, they can hop it, they can do whatever they like. Just the proceeds help rescue that is trying to really bring awareness to the care that rabbits need.”

The registration fee for the event is $30, or you can pay $40 and you get a t-shirt. If you’re interested in signing up, just click here. Or you can visit The Mud Hud in Salisbury and scan the QR code in store.